Scott Hart, captain of the Braidwood RFS brigade spent four months last summer fighting fires throughout the state. Now his brigade are girding their loins for the coming fire season.

"WIth any sort of luck," Captain Hart said, "we're not going to see anything like what we saw last summer again in our lives, provided things are properly managed and a few of the Bushfire Inquiry's recommendations are followed."

But Captain Hart continued: "We're urging everyone to be prepared.

"There are a lot more houses than there are trucks to deal with them. Don't miss the opportunity we've got now - we've had the reset button pushed. We can start managing things better - at every level from National Parks through the Fire Agency down through individual landowners. Manage your land so that we don't get the situation we had again."

'Get Ready' for summer

The Braidwood brigade will have an information stall at the Ryrie Park market on September 26 - part of the RFS's Get Ready campaign to help people find out about bush fire risks and plan ahead.

The official RFS date is September 19 and 20, but the Braidwood group see more people if they hold the event in conjunction with the markets, rather than as a stand-alone event.

"There's a public face to us in a public area where it's easy for people to find us," Captain Hart said.

This year, Captain Hart said, the brigade wants to emphasise the importance of public preparedness.

"We're not going to have a truck at every house, so you need to be a bit prepared yourself. Make sure that your gates are wide enough and your trees are clear so that we can get in there, but also make sure you've got a bit of equipment so you can look after yourself, and help us help you."

Kids can practise putting out fires with a hose pump, while experienced firefighters will be on hand to talk about individual requirements.

"The Get Ready weekend is one way of turning around & being highly visible, and being able to answer those individual questions, because no two landowners will have the same question," Captain Hart said.

"Sometimes the shotgun approach of throwing too much information out there misses the target; you need more of a scalpel approach. We make quite a few introductions where we go out and visit people's homes and do an assessment if they feel they need it."

For instance, the RFS has been invited by residents in the Araluen escarpment who came under threat last summer to discuss what they did to fight the fires, what worked and what didn't.

"If individual smaller areas get together, we are more than happy to go out and discuss their particular issues on site," Captain Hart said. "These things are best driven by the community asking for what they want, rather than the government telling them what they should want." 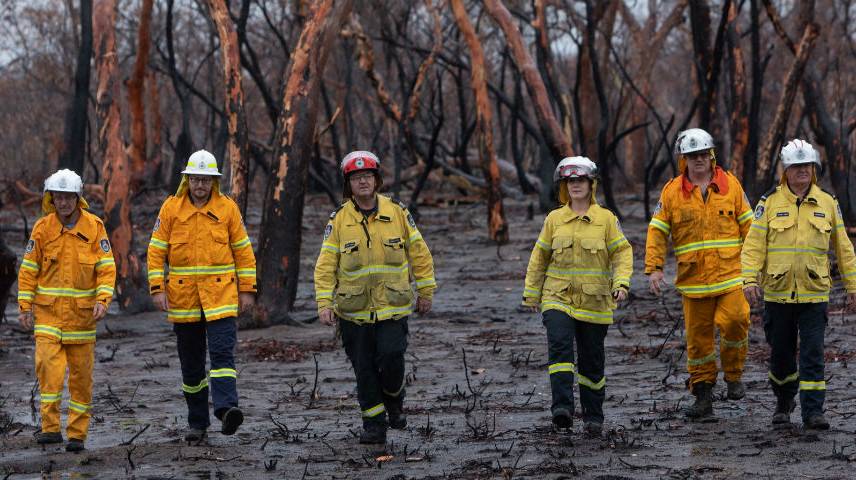 The RFS brigade has 50-odd members on their books, Captain Hart said: 20 operational members, who come out for the big fires ("Plenty of those resurfaced, and we were glad to see them"), and half a dozen who are "available at the drop of a hat, who'll just go, no matter what the call is".

Three new members have joined since summer; they passed their assessment in the last fortnight, so are now ready go to online.

Braidwood, Captain Hart said, had the smallest uptake of new members out of the local brigades; Major's Creek, for instance, had eight or nine.

"They've put on a lot more because they're living right on the timber," Captain Hart said. "We had a couple of bad days in the town, but the outlying areas had a lot more bad days. And so these landowners further out realise they need to help themselves a bit."

"Too many people see all the excitement and want to join, but the reality is we're much more likely to be pulled out of bed at 2 o'clock in the morning to deal with someone's pile burn or a car accident than we are to get to fight those big fires.

"There's very little to no glamour around the normal things that we do. So make sure that you are happy to work with us on doing the mundane things as well as the big stuff."

The Braidwood station was designed to be a regional control centre in the event of the big fires; it "copped an absolute workout" from November to February, Captain Hart said, as 300 people used the building on any given day.

The RFS has used a $10,000 grant raised through comedian Celeste Barber's Facebook fundraising campaign to refurbish the centre, and bring it up to its former glory. It came at the right time; the seven-year-old station was due for an overhaul.

The brigade has also received other donations, allowing them to buy equipment (such as a blower used for fighting fires and clearing fire trails) and other creature comforts that have been on their wish list for decades.

"For a brigade that always used to worry if we could spend a couple of hundred dollars, we're now in a position where if we need it, we can get it," Captain Hart said. "That's all been through the generosity of the public purse.

"The Celeste Barber campaign was fantastic - that certainly has been a total bonus for us - but the generosity of the public has to an awfully large degree matched if not gone beyond that."

Clearing up after the fires

Last summer's fires were unprecedented because of their scale, Captain Hart said: all the way up the Great Dividing Range, in extreme drought conditions. Now the whole state has got rain - Major's Creek, where Captain Hart lives, has had a metre of rain since the end of the fires - so the soil is moist.

The bush, too, is thinner than it was, and will take generations to regrow.

"There's simply not the fuel load now, nor will there be for quite a long time in a lot of places," Captain Hart said. "The reset button has been pushed.

"I know the call is that fires will be bigger and badder, but if you've taken away 50 to 100 years' worth of fuel accumulation on the ground, then the result can't the same. They simply cannot be as hot if there's not much fuel about."

With the fuels cleared away, and a change in the seasonal conditions, the RFS can undertake cool burnings.

The general Braidwood district was burnt out in the summer fires; most of the timber has been cleared up, Captain Hart said, but they have not been able to do some of the hazard restriction burns they would like; there would be too little habitat left for the remaining flora and fauna.

"There is the odd patch of timber and forestry that didn't burn, and we may still have some fires - but will we see one on the same scale? I don't think I'll see anything like what we've seen ever again."